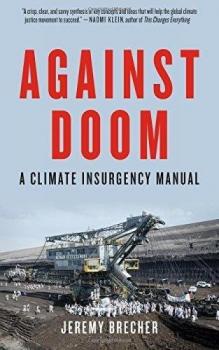 According to longtime activist and author Jeremy Brecher, ‘we are witnessing the birth of a global nonviolent constitutional insurgency’ to prevent catastrophic climate change. In this short and timely book he attempts to explain how and why this insurgency has emerged and seeks to ‘[lay] out a strategy for climate insurgents in the US’.

The ‘why’ of the insurgency is a relatively straightforward matter. PR aside, governments and corporations have thus far failed to take meaningful action on climate change – with the result that people across the world are increasingly starting to take matters into their own hands.

Thus the 2015 UN climate summit in Paris failed to agree ‘a single legally binding requirement’ about how, or how much, member states would cut the greenhouse gas emissions produced by burning fossil fuels (oil, coal and gas) – the main driver of global warming. Moreover, even if all of the (non-binding) pledges that were made in Paris are followed through on, this would still lead to a global temperature rise of 3.50 C above pre-industrial levels by 2100. Even a 20 C rise would be enough to make every European summer as hot as 2003, when 30,000 people died from heatstroke, and to cause the complete melting of the Greenland ice sheet, raising global sea levels by 21 feet (7m).

In effect, Brecher notes, the Paris summit was ‘a conspiracy of the world’s governments to rob the world’s people and our posterity of our common inheritance’.

Nonetheless, the immediate goal of the climate insurgency, Brecher writes, should be the same as that declared by the nations of the world in Paris: to prevent more than 1.50C of global warming. However actually achieving this – rather than postponing the necessary actions indefinitely – will require huge changes: reducing developed countries’ greenhouse gas emissions to ‘essentially zero by 2050’, while preserving and expanding ‘sinks’ such as forests and farms that withdraw carbon from the atmosphere, and using renewables and energy efficiency to replace all of the world’s existing fossil fuel energy infrastructure, again by 2050.

Breaking this down slightly, Brecher advocates that, wherever it is, the movement makes ‘two basic demands’ on every business, government, and institution that it contends with: (1) an immediate halt on all new fossil fuel infrastructure; and (2) the creation and immediate implementation of a plan that ‘lays out a credible pathway for the elimination of fossil fuel use [by that entity] by 2050’ (a ‘Climate Action Plan’).

As one small example of how this might play out in practice, Brecher cites the recent law suit filed by eight children in Washington State that resulted in King County superior court judge Hollis Hill ordering the State of Washington’s department of ecology to promulgate a carbon emissions reduction rule by the end of 2016. This was the first time that a US court ‘not only recognised the extraordinary harms young people are facing due to climate change, but ordered an agency to do something about it.’

Notwithstanding the many inspiring examples of action that he cites – ranging geographically from Turkey and Brazil to Indonesia and New Zealand – Brecher is acutely aware of the many challenges facing this fledgling global insurgency.

Thus, in the US – and I suspect in the UK also – ‘many people are poorly informed about the causes of climate change and what is necessary to halt it’ and ‘believe themselves powerless to affect it’. Moreover, ‘[t]he climate protection movement [there] is largely isolated from the great majority of people whose interest it represents.’

Consequently, a central goal of his strategic recommendations for US activists is a process of ‘de-isolation and movement construction’ that helps to break down ‘the invisible rules that currently discourage people from thinking and talking about the one thing that will most determine their future and that of their posterity.’

Drawing explicitly on political theorist Gene Sharp’s work on nonviolent action, Brecher advocates a strategy that not only involves organising millions of people to take actions that undermine the fossil fuel industries’ ‘pillars of support’ (whether legal, financial, or its ‘social licence’ to continue business as usual) while forcing governments, businesses and other institutions to implement alternatives to fossil fuels (renewables, energy efficiency), but also develops parallel institutions (people’s tribunals, popular assemblies and the like) that can ‘provide the ultimate sanction against those governments that continue to authorize climate destruction’, through delegitimisation and mass non-cooperation.

Given where we currently stand, this may all sound like pie-in-the-sky. However, Brecher cites some astonishing figures that suggest otherwise. According to one survey, one-in-six Americans – some 40 million people – say that they would personally engage in nonviolent civil disobedience against corporate or government activities that make global warming worse.

This suggests a vast potential for such activity – if enough people can be brought to the point where they feel that it could be effective – itself a core objective of Brecher’s strategy.

In his introduction, Brecher writes of his hope that ‘readers will examine the strategy proposed here critically’, correcting flaws or developing ‘a better alternative’ if necessary, and anyone involved in climate change activism in either the US or the UK would do well to read and ponder this book.

Brecher also notes that ‘climate protection can’t wait for a perfect strategy’. Rather, ‘all of us have a duty to find the best strategy [that we can] – and then act on it.’